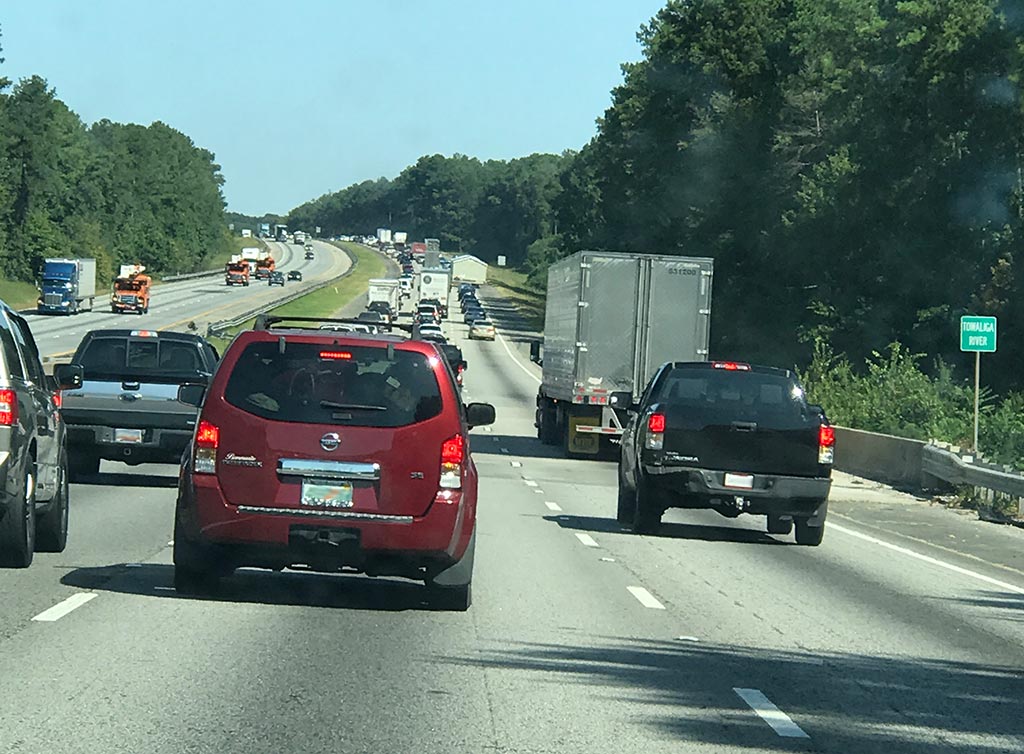 We may joke about how booze and margarita mix are all the hurricane supplies that a Floridian needs, but the truth of the matter is that hurricanes are scary as hell.

Looking back at the pictures of how Hurricane Harvey buried Houston under water only weeks ago, not to mention the sheer and utter devastation left behind by past storms like Hurricane Andrew and Hurricane Katrina, I’d challenge you not to get at least a little nervous if you looked at the National Hurricane Center’s projections to find that the next Category 5 hurricane just happened to be heading straight for your house…

Which is exactly the situation that my family found ourselves in two weeks ago when we decided to evacuate for Hurricane Irma.

Now the truth is that I’ve lived in Florida for 14 years now and I’ve actually evacuated for hurricanes a couple of times in the past, yet this one was different somehow.

For starters, I had just recently moved to Florida when Hurricanes Charley and Frances forced my relocation to Orlando and Atlanta, respectively, in 2004. My apartment was located in the very first flood zone on the map and frankly I had no idea where to go, so when the call center where I worked designated a team to evacuate in case our office in Tampa could no longer operate, I eagerly volunteered for a week and a half’s worth of company-paid lodging and food out of each storm’s path!

…and in both cases, ironically enough, the storms ended up missing our hometown entirely – in one case seemingly following us instead to Orlando where I spent the evening watching it on the news as it passed by overhead outside…

Still, some 13 years and countless dull hurricane seasons later, I was very reluctant to evacuate as the projections for Hurricane Irma loomed closer and closer. I felt that we’d done a pretty good job of preparing ourselves – we had plenty of food and water on hand, formula and diapers for the babies, and flashlights and batteries for when the power went out. The only thing we hadn’t done was boarded up the windows, simply because I hadn’t made it to the store in time to buy wood before they sold out. But for the most part, we were as ready as we felt we could be…

…and then the 5:00pm update showed the hurricane’s path going directly over our home.

My wife and I spent the next three hours nervously biding time until a new update would be published.

“The storm is still another three days away – it’ll probably keep drifting west and miss us by a mile anyways.”

In hindsight, we both agreed that if we didn’t have kids, we’d probably have just stuck it out like millions of other Floridians, but knowing how likely it was that we would lose power and having two babies in the house that were barely a year old, ultimately we decided that it just wasn’t worth the risk and so at 11 o’clock on a Friday night, we started packing up everything we could think of that we might need for the foreseeable future… 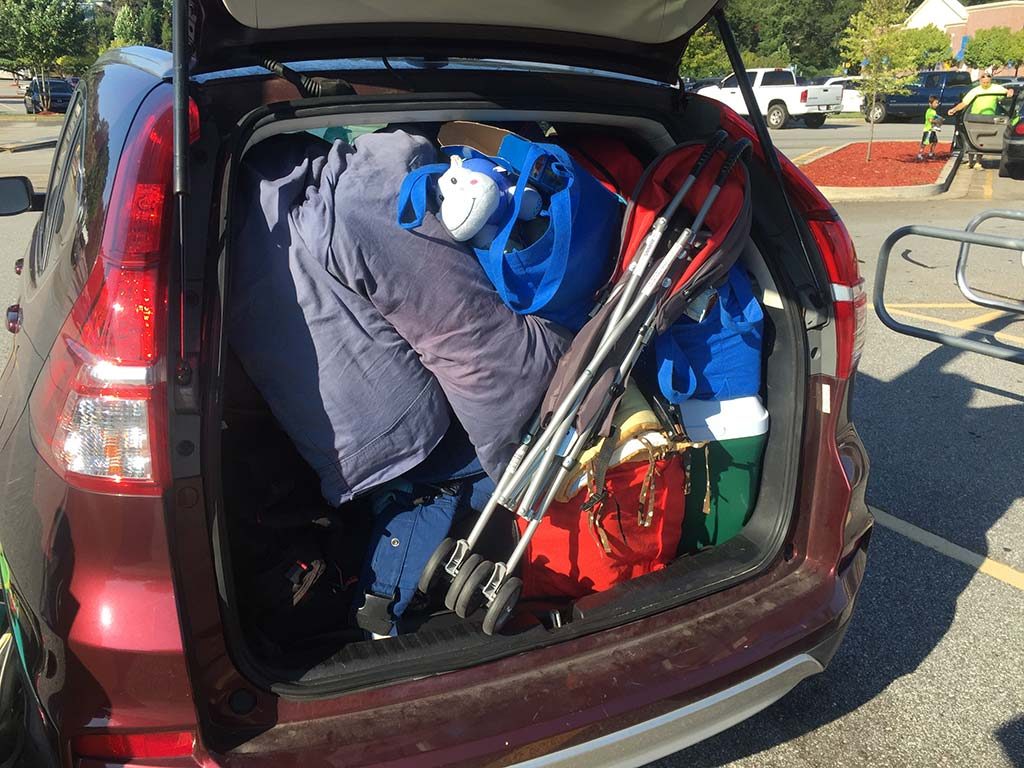 Honestly, it was a real pain in the ass, and as you can see, it’s nothing short of a miracle that we even got it all to fit, but in the back of my mind I kept remembering a quote I had read from our governor that really seemed to drill it all home as we spent the next 17 hours on the road until we arrived at our hotel four states away in Tennessee…

Evacuations are not convenient, they are meant to keep you safe. Visit https://t.co/hSAYcrnXdH for evacuation routes.

The next day we watched from 800 miles away as Hurricane Irma inched closer and closer to our home and to countless of our friends and family back home who had opted to stay behind. By the time it had passed, over 800,000 households in the Tampa Bay Area were without electricity – upwards of 6 million across the entire state of Florida. Almost everyone that we knew who were still in Florida had lost power.

Though it’s said that the damages were far less than what they could have been, primarily because Irma didn’t create the storm surge that was expected because it tracked up the middle of the state, it’s estimated that 50 people died from the storm – including 9 fatalities at a nursing home that was ill-equipped and didn’t evacuate its residents. As electrical crews rushed to restore power, a week later there were still 375,000 homes and businesses without electricity, which has also made restocking grocery stores a challenge as many stores and warehouses across Florida were similarly affected.

Now of course, I can’t make the decision of whether it’s right to evacuate for anybody else – all I can say is that my family weighed the pros and the cons, and eventually came to the realization that for our own situation it made more sense for us to leave. Which was really, really hard.

Ironically enough, our house retained power the entire time … but it could’ve just as easily not have.

Whether you’re going to make preparations or evacuate from a hurricane, the most important thing is that you do it.

Throughout the entire week leading up to evacuating as we were making plans, I read so many accounts of people on social media who weren’t doing anything simply because of what they’d heard online.

“All of the stores are out of water anyways…”

“The lines at the gas stations are down the road and they’re all out of gas!”

“The freeways are bumper to bumper with people going nowhere.”

Yes, it was chaotic at times.

And yes, sometimes getting supplies took a little more effort than a casual trip to the grocery store … but your family’s safety is worth the time and effort.

When we pulled out of our driveway at 2:00am on Friday, I feared seeing nothing but brake lights once we got to the freeway … but that’s not what I found. Sure, traffic was heavier than one would expect in the middle of the night, yet truth be told we drove 60+ mph for almost our entire trip.

When I went to get gas a few days earlier, the first station I went to was roped off because they were completely out … so I went to the next station and I waited in line for a few minutes, and I got what I needed.

One of the most terrifying parts of this whole experience for me was walking around my house at midnight trying to decide what we needed to take with us just in case we didn’t have a home to come back to, and there were a couple of times I just had to sit down and look around and take a minute. But then I went back to work collecting our passports and insurance papers – because that’s what you have to do.

At the end of it all on our drive back home, once we had confirmed with neighbors that nothing major had happened to our house, we wondered again if we had just been overreacting to the whole thing, but ultimately I came to the conclusion that you have to look at an evacuation the same way that you look at having insurance…

What sense does it make to feel gipped if you go the entire year paying for health insurance without using?

Would it make you feel better if you actually broke your arm so that you got a chance to use it???