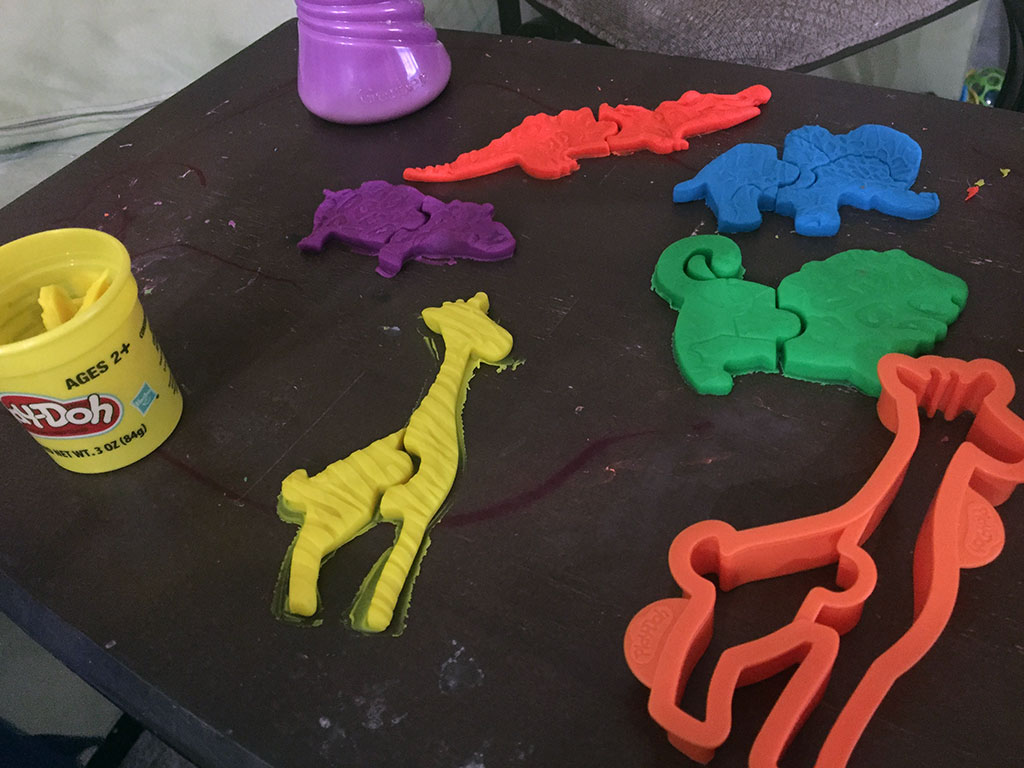 Everything becomes more … complicated … once you have kids.

There’s no such thing as “just running somewhere real quick” anymore – that is, unless you’ve managed to talk your partner into watching the clan while you’re gone, and even then it’s hard not to get lost in the moment and find yourself an hour and a half later playing Angry Birds in the Target restroom because it’s so quiet in there and they don’t have demanding children bursting through the door every five seconds or anything!

Any simple task that you once had becomes a process, whether it’s the two-hour affair of loading up the car to go grocery shopping for the week or just trying to do a load of laundry while avoiding the kids dumping your nice, clean clothes all over the floor so that they can play with the laundry basket and/or shutting one of their brothers’ heads in the dryer door.

For some things, I like to think that by now we’ve got our own little rituals down pat.

When we go to Disney World, we take two double strollers, which gives us a seat for each of our three kids and one extra to keep the diaper bag easily accessible. We know that our best chance of fitting everyone on the tram in the parking lot is to aim for that larger row at the front of each car because two folded up double strollers take up a lot of tram room – nevermind everything else! And once we’re there, we’ve honestly grown content with just letting the kids call the shots because it’s easier to ride Dumbo three times in a row than it is to listen to three hours of screaming about why we didn’t…

Of course, I think one of the hardest rituals for any parent to master is bedtime.

Because kids hate it, and why wouldn’t they?! All they do is play and have fun literally the entire day – I wouldn’t want to go to bed if my days were all play and no work, either!

Our toddler is a challenge, to say the least, because not only does he fight going to bed every step of the way and stretch the whole thing out literally for hours and hours, but if you dare to leave him unattended thinking that he’ll just fall asleep on his own when the time is right … well, let’s just say that bad things have been known to happen and I’ll leave it to you to decide whether you want to click that link and read a funny story about cleaning up poop before continuing on here.

Gross, huh? That’s parenting for ya!

So our latest bedtime ritual extraordinaire goes a little something like this:

Mind you, the whole ritual started out much smaller than this and went through considerable refinement, such as realizing the need to lock the nursery door after putting his brothers to bed after that one time he snuck into their room and decided to wake everyone up by hosting an impromptu dance party in one brother’s crib!

It took us a while, but eventually we also figured out that after the first two or three extra trips to the potty, the next dozen after that are absolutely BS … the author of If You Give a Mouse a Cookie could’ve easily written a bathroom companion book, If You Take a Toddler to the Potty … he’s going to want a book to read, and his iPad, and some goldfish to snack on, and a top off on his chocolate milk…

The tricky part is that these newfound parenting rituals are never really set in stone – they can’t be because one day you’ll wake up to find that suddenly a kid has figured out how to climb out of their crib overnight or maybe the one who loved broccoli now mysteriously hates broccoli as if they were visited by some sort of broccoli monster and got spooked when you were off cleaning up one of their other messes.

It forces you to become more receptive to change – something that admittedly has always been a challenge for me – but when you’re three hours into bedtime without any sign of slumber in sight, you might find that you’re willing to try just about anything!