I faced a lot of unnecessary challenges at work. I gained some more weight. I added debt to credit cards. I struggled with my health, and even spent a couple of days in the hospital – an uncomfortable first there, to say the least!

Frankly, I don’t think that I spent nearly enough time enjoying life as a 38 year-old guy with a loving wife and three rambunctious kids should have.

Invest in yourself – it pays the best interest.

Your biggest commitment must always be to yourself.

No one will advocate for you better than yourself.

Collectively what these three statements mean to me is that at the end of the day, I need to spend more of my time focused on me.

And not in a self-centered, egotistical way, but simply because as that last quote so eloquently suggests – no one else is in a better place to do so than I am. It’s an idea that really clicked in my head last year as I watched a couple of things I had been counting on fall flat because I had left them up to other people, which of course sometimes you can’t really avoid, but nonetheless it certainly became clear that at the end of the day nobody else will put as much into my own self improvement as I will.

So that’s the first area that I really want to focus on in 2019 – taking better care of myself.

There are things that I’ve already tried, like meditation and yoga, and things that I just know I need to be doing, like exercising and eating better.

I’d also like to do better at taking my medications on a regular schedule, and even organizing my thoughts before going to therapy so that I can make the most of that precious hour of professional insight that I get twice a month!

These are all things that I’ve struggled with in the past, so making time for them I think is going to be key – even if it only starts with a few minutes a day until I can build up a regiment where they become things that I don’t necessarily have to force myself to do so much.

Next on my list – I want to start embracing my passions again.

The big one on this list is writing, and one observation that I’ve made over the last year is that unfortunately social media has really transformed how I spend my time at the keyboard or on my phone … and not necessarily for the better…

Last spring I wrote about taking a cleanse from social media, and more than ever I’m feeling the need to go back to that mentality because I think if you let it, the social media hurricane will consume you and everyone you care about without looking back! 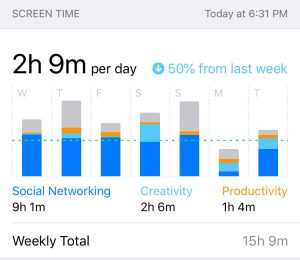 Case in point – according to the Screen Time option on my phone, last week I used social media just on my phone an average of 1.25 hours a day … and that was 50% down from the previous week!!!

More importantly, though – I pride myself in being a writer and quite frankly, social media is not the type of content that I’m passionate about writing.

So as I ease myself away from the likes of Facebook and Twitter as I once again struggle to figure out exactly how they fit in my life as I move into 2019, I want to challenge myself to write more and share less.

That means things like writing actual blog posts when I have a political idea that I want to explore or a movie that I want to comment on … not to mention just putting more than ten seconds of thought into an idea before shoving it out onto the Internet to live in perpetuity!

And last but not least, a goal that really intertwines with everything else that I’ve outlined here today – I want to become a more effective worker so that I can do a better job of differentiating between work and everything else in my life.

I want to learn to hone the time that I spend on any given thing so I can get it done quickly, effectively, and without distractions…

…so that when it’s time to put down the cell phone and focus on playing with my kids, for example, I don’t feel the conflict that I often do today about not spending my time in the right places.

Which I’m sure you can imagine is why I’ve struggled with so many of the other things I’ve mentioned because right now in my mind, there’s always something else that I could be doing instead of taking five minutes to meditate and calm my mind or even spending an hour playing an old video game that I genuinely enjoy.

No one wants to live a life of regrets, but in a time when I’ve got more to do than ever before, I need to learn how to balance my priorities so that I can allow myself to feel good about the things that I did get done instead of just dwelling on the leftover ones that I didn’t.

Anything else that’s still important will fall into place when the time is right.